Worship
Close
Play
St. Paul's is a family and a place that you are always welcome. Join us after Sunday services for coffee hour or at a parish event. Meet people, make friends, and remember that you belong at St. Paul's.
Love
St. Paul's values the many talents of the people that serve and attend St. Paul’s. Ministries and Guilds are a great place to have fun, make friends, and to belong.
Worship
At St. Paul's, worship is the main event; it is what brings people back week after week. We celebrate the promise that God made to all by sending his Son, not to condemn, but to love.
Connect
St. Paul's is located in downtown Muskegon, but more than that, St. Paul's loves downtown Muskegon. Evangelism allows St. Paul's to meet its neighbors, build connections in the community, and bring hope to the city that we love.
Discover
St. Paul's invites you to go beyond Sunday worship, to create a stronger relationship with a loving God. Join a Small Group or a Christian Education class to dig deeper, love stronger, and accept forgiveness.
Give
We express generosity in many ways. I was made aware of this when I read about different modes of giving in a church newsletter from Trinity Church, Wall Street, in New York City. There are four concepts of giving: charity, philanthropy, fund-raising and stewardship. 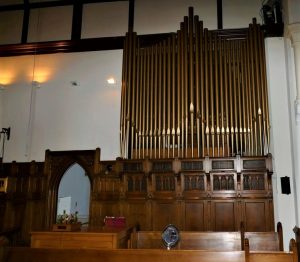 The pipe organ at St. Paul’s was built by the Austin Organ Company of Hartford, Connecticut in 1928. It was built as a four manual organ of 42 ranks of pipes (now 52 ranks). In the 1960’s, the organ was rebuilt.  In 2009, the organ was completely rebuilt mechanically. The organ console which had performed for 80 years was worn out. Due to the need to maintain the same location and a small footprint, the old console woodwork was retained and refinished. The console received new keyboards which have bone natural keytops with ebony sharps. The pedalboard was rebuilt and the bench was made adjustable. The “guts” of the console are also completely new, with solid-state coupler and keying systems as well as a 128 memory level combination action.

For a full history of the organ, refurbishments, and changes, Click Here 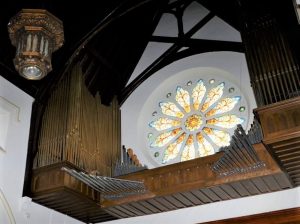 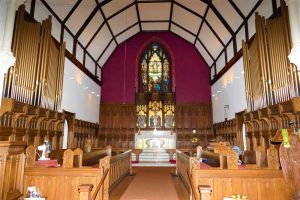